Today we often think of labour rights as inherent human rights given to us at birth. This was not the case prior to the later half of the 20th century. In one of British Columbia’s first major industries along side logging, the fisheries went through a tremendous amount of negotiations, disagreements and strikes during the 1950’s and 60’s to obtain labour rights for all involved in the industry. The two decades saw economic downturn in the late 1950s while the 1960s saw united militant union action on the part of shore workers, tendermen and fishermen.

It has been noted that prior to the late 1950s, workers involved in the fisheries split into their own select groups to fight the canneries for labour, Indigenous and safety rights. Furthermore they often split off into these groups by gender and class in some cases. This made collective bargaining very difficult as they were only advocating for a very small group of people. In 1959 things began to change as the groups started to advocate together, mainly under two large unions “The Native Brotherhood of British Columbia” and “ United Fishermen and Allied Workers Union.” This then gave them the tools as a larger group to begin bargaining together as separate labour groups under the same name. This was used to stop various cannery companies from playing the different groups against one another. This also allowed the fisheries to be much more militant on issues of racism and sexism that was formerly hard to fight as they had been physically separated by race and gender. This gave the workers the tools to collectively strike which was much more influential on the canneries than if just one sector of the workforce was striking. 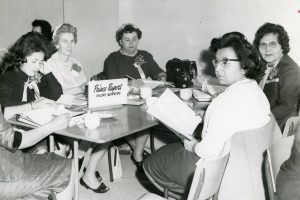 After 1959 the agreements between Anglo-British Columbia Packing Co. who owned both Sunnyside and North Pacific Cannery, and fisheries workers were collectively bargained to see fair wage increases as well as seniority rights and racial discrimination policies be implemented and destroyed. In 1961 the shoreworkers at Sunnyside cannery, Port Edward alongside other cannery workers proposed an increase of wages by fifteen cents coupled with an increase of three cents for night shift work as well as holiday pay equal to three and a half percent of regular pay and lastly they advocated for free access to safety items like hard hats and coveralls. At the same time the tendermen of the UFAWU were advocating for seniority rights which would enable the most senior tendermen at each cannery who had been with the company the longest would be called first to complete a job as well as be offered the first jobs available after a layoff period. The tendermen also advocated for pay raises and minimum wages guarantees for 90 days if hired before peak season. 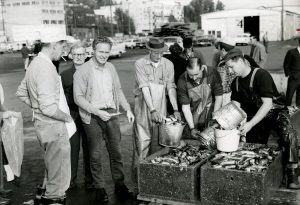 As seen in the final agreement of herring fishermen in 1964, an agreement that was prepared alongside both the tendermen and the shoreworkers agreements, herring fishermen were allowed increased welfare benefits, increased wages in the form of minimum fish prices, increased safety regulations and the introduction of a more formal holiday pay requirement. This shows us that the negotiations between the workers, ABC and the UFAWU were successful in the early 1960s and that many of the wishes of the workers were being implemented and listened to through means of negotiation and striking. Through archival research at the Port Edward archives we can also see that there was a tremendous amount of

correspondence from Vancouver UFAWU and canneries such as North Pacific and Sunnyside during the negotiations of new master agreements. The canneries were offered input and given many notices of when policies changed, such as the welfare plan and retirement plans located in the 1964 Herring Agreement.

The years from 1950 to 1964 were plagued by many hard fought strikes and labour battles between the UFAWU and various cannery owners such as ABC. However the years also saw cooperation between the different types of cannery work as well the election of Verna Parkins, the first woman representative of the Prince Rupert UFAWU. Strikes in these years went from localized smalls strikes to general strikes across the province allowing the union to advocate and win major wage increases as well as ensure safety plans and retirement insurance for many of its workers to a greater degree than ever before. By the 1970s the cannery business was slowing down, eventually coming to a halt in the next 45 years as tendermen became obsolete with new technology and the market value of canned salmon dropped. The progress made in the mid 20th century would not be lost, today there is but one small cannery left in British Columbia, however the unions and in particular the UFAWU continues to advocate strongly for fishermen and fresh fish processors and has a new guiding hope as the Fisheries Act has now been opened to changes and input as of August 2017 which can only hope to brighten many futures and the fishing industry in Port Edward and along the rest of the Skeena river.