Despite the fact that the canneries in northern B.C. were spaces where many different racial groups worked and interacted together, racialized and gendered structures were still often present. A certain level of discrimination is evident by the designation of jobs according to gender and race at the North Pacific Cannery from the 1910s – 1960s, as well as the way different racial groups and genders were referred to in cannery records from that time period. To begin with, North Pacific Cannery ledgers from the 1910s list Chinese, white, and Japanese workers separately with different jobs assigned according to ethnicity. For instance, Japanese workers most commonly worked as carpenters and laborers, while Chinese men generally seem to have worked in the messhouse. However, it should be noted that sometimes racial groups/genders did perform the same jobs. As a side point, this racial inequity is even obvious in the housing set up at the canneries, as whites, Japanese, Chinese, and First Nations people were all housed separately, according to 1923 fire plans of canneries in northern B.C. 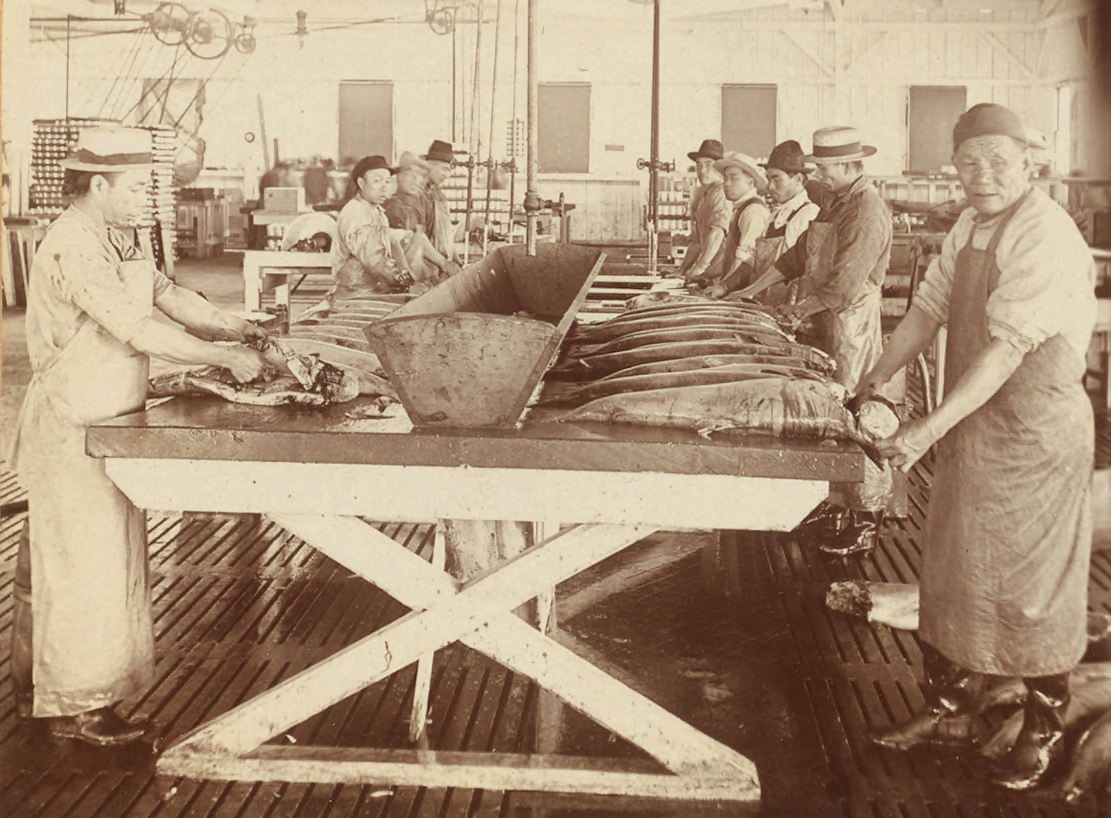 Unfortunately, racist and sexist attitudes in the cannery continued even into the 1940s and 1950s. For instance, ledgers from the fish house at the North Pacific Cannery written during this time period list almost a hundred women working at the cannery per year. However, in an Arrandale Cannery (a nearby cannery) ledger from around the same time, any women recorded (and not very many are recorded) are listed with their husbands’ names, perhaps indicating that women workers were only recorded in relation to their husbands and that women’s work was seen as less important than men’s. Furthermore, North Pacific Cannery ledgers and journals from the 1940s and 1950s show that nationality was also still used to differentiate laborers. For example, “white labor” is always distinguished separately in these records. Interestingly, records from the Arrandale Cannery only sometimes mention nationality in relation to jobs, which perhaps shows that wages and maybe even jobs were not as racialized in northern B.C. in the 1940s as they were earlier.

Despite this, in the early 1960s, racial discrimination still appeared to be common in the North Pacific Cannery. For instance, in wage records from this time period, Aboriginal people are called “native,” whereas European Canadians are called “Canadian,” which already shows a certain level of racial discrimination involved in such labels. Moreover, looking closely at these records reveals an interesting pattern in the type of occupations assigned to each gender/race. The most common occupation for First Nations women appears to be “washer,” though these women fulfilled other tasks, such as netwoman, butcher, and even working with the fish machine. On the whole, First Nations women still had the most and greatest variety of jobs of all the women working at the North Pacific Cannery. First Nations men, on the other hand, had more traditionally “male” tasks, such as laborer, watchman, reform line, and even occasionally captain, showing the difference based on gender in how jobs were assigned.

However, there is a shift in the types of tasks involved when looking at the jobs “Canadian” men filled. These jobs, which included engineer, electrician, and captain, appear to utilize a more specific skill set and consequently were probably seen as more “important,” showing the prevalence of racialized thinking in designating these jobs to white Canadians. Despite this, such job designations could have been given simply based on people’s already-existing skills, rather than racial discrimination. In contrast to First Nations women, white women did not seem to have worked much in the canneries at all. Chinese and Japanese women also did not appear to have done many cannery jobs, though the amount of Chinese women working increased as the 1960s progressed. Furthermore, Chinese men had more traditionally “female” jobs that were sometimes filled by First Nations women, as Chinese men were primarily butchers and cooks. Japanese men, on the other hand, had jobs that were seen as more traditionally “male,” including fish pitcher, mechanic, and carpenter. This shows a hierarchy even between Asian racialized workers. Interestingly, in 1966, there is a shift in how race is listed on the wage records, as First Nations people were now labelled “Native Canadians.” In 1967, there is no race listed for any of the workers, indicating a shift in identifying workers with the work they were able to do rather than their nationality.

Even in the late twentieth century, women and men working in the North Pacific Cannery were still assigned to different jobs according to gender, though equal opportunities’ movements sought to put an end to this. Cecily Moore, a First Nations woman who had worked at the cannery, explained that women were mainly fish pullers and washers. Furthermore, as Renisa Mawani explains in Colonial Proximities: Crossracial Encounters and Juridical Truths in British Columbia, 1871–1921, the canneries depended on a large supply of inexpensive labor, which was often filled by Asian immigrants and First Nations people. However, despite the fact that the canneries helped segregate racial groups, canneries also helped bring racialized workers together, as people of all different ethnicities worked together in them. On the whole, as all the information above shows, it becomes clear that there were racialized and gendered structures in the North Pacific Cannery from the 1910s – 1960s just by examining the distribution of jobs to different genders and racial groups.